Stories of Broken Men and Shattered Lives in the U.P. 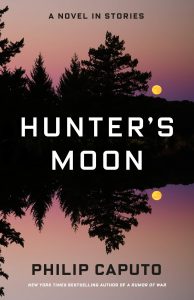 Hunter’s Moon, by Philip Caputo, is a nihilistic romp through the lives of military veterans set against the backdrop of a bleak Upper Peninsula. Caputo, a Pulitzer-prize winning journalist, is still probably best known for the watershed novel, A Rumor of War, that has gone on to sell multi-million copies since 1977. In this year’s novel, Hunter’s Moon, he turns his telescope towards Michigan’s U.P. to tell a story about men and the messes their lives become as veterans of the U.S. military.  The loosely connected stories introduce characters that return over the course of four decades to try and achieve closure with that which cannot be described to those who did not live the experience.  The final eponymous story of the collection brings this home, with Caputo’s thesis that “all war stories are false” because they cannot be told – only experienced.

In Caputo’s anthology, the U.P. is a vast and unforgiving wilderness, populated with broken people and those trying to escape one thing or another.  Most of them, other than an innkeeper and a brewpub owner, are trying to cobble together a living from an amalgam of whatever is handy: hunting guide, truck driver, poacher and even a petty grifter.  Caputo asserts that in the U.P., “food stamps were as good as gold and far more prevalent.” They take pride in building and renovating their own houses, often living far enough off-the-grid as to require a generator and the ubiquitous woodstove.  The U.P. stories take place either around the shoreline of Lake Superior or near a town called Vieux Desert, which I take to be Lac Vieux Desert, straddling the state lines between Wisconsin and Michigan in Gogebic County. However, in many ways, the U.P. could be standing in for upstate New York, Minnesota or any of the far reaches of the Midwest. In that sense, perhaps the U.P. is merely window dressing for the stories.

Advice to writers usually begins with “write what you know,” and as a veteran of the Viet Nam conflict, Caputo is most at home writing about vets dealing with the shrapnel of PTSD that cannot be excised: flashbacks, short-fused anger, insomnia, intrusive thoughts, hypervigilance, startle reactions and so on. These psychic wounds gush forth much like the physical neck wound that Inman, a civil war soldier, suffers in the novel Cold Mountain. Caputo’s pessimism reaches its nadir in the eponymous and final story, which is a rich riposte towards the smorgasbord of New Age theology, absconded Native American ritual and wishful thinking that comprises a fictional veterans’ retreat in the U.P.  A reader can’t help but see this as a thinly disguised roman à clef as the protagonist in this story also wrote a successful Viet Nam book and is conscripted by the retreat organizers to read selections of his novel as if they were therapeutic incantations, on the level of the camp’s own “certified Ojibwa shaman.”  At best, this is a cautionary tale of the hubris inherent in our quest to heal; at worst it is a sordid tale of man’s penchant for self-immolation.

The first three of the seven stories in the book form a trifecta of despair: suicide, bereavement and homicide. Tom is a Navy airman and veteran of Desert Storm who never got to fly but settled for second best as the backseat bombardier. Lately, he’s an alcoholic and his wife has taken to spiking his orange juice with Zoloft.  He’s got good reason to be depressed, as he’s burned all his family’s money to prop up the dying newspaper he inherited as his birthright. Like Jimmy Stewart in It’s a Wonderful Life, he’s worth more dead than alive.  Hal and Jeffrey Havileck are father and son, trapped on a hunting trip that neither enjoys at all. Hal has terminally disappointed his father by refusing to get an engineering degree to take over Jeffrey’s beverage packaging machine business.  All the more bitter since the father never went further than being a talented machinist, passing up his chance to go to college after WWII. Hal is trapped in an endless pendulum swinging from rage to grief and back again. Will Treadwell is a Viet Nam combat vet who draws the ire of Mike Kidman, the local psychopath. Kidman is a veteran of the Iraq/Afghanistan era and a punk who glamorizes violence because he never got closer than Fort Benning, Georgia to seeing action. Kidman’s carjacking and murderous rampage will see them go head-to-head.

With a title like “Hunter’s Moon,” you should not be surprised (I suppose) that hunting is an integral part of each story. Although I was taught to shoot rifles as a young teenager, I’ve never actually been on a hunt, and as such, the details of guns and game tracking were a bit lost on me, so I cannot speak to their veracity. The hunts include black bear, deer, game birds and then caribou and Dall sheep in one story about Alaska. The hunts most serve as the backdrop for the intergenerational and interpersonal conflicts of men to be worked out. Only one of the stories has a fully fleshed-out female character; most of them serve just as foils for the men to bounce their thoughts and deeds off of.  Caputo does yeoman’s work in his precise descriptions of the various landscapes and ecosystems around the U.P.; it really put me in the scene. Hunter’s Moon is a difficult read and not for everyone. Caputo paints a picture of the U.P. at least as desperate as Appalachia or Harlan County, Kentucky that is a tense and unrelentingly angst-filled journey.