A Dangerous Season by Russell Fee 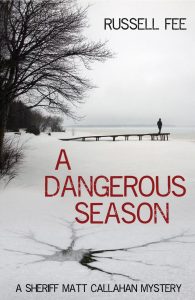 “A Dangerous Season” by Russell Fee is the third and final installment of the Sherriff Matt Callahan Mysteries.  As with the previous stories, the action takes place mostly on the fictional Nicolet Island. My sense of Michigan geography is maybe not as well-developed as it could be, but my instincts tell me that Nicolet Island is standing in for Beaver Island.   In Fee’s stories, Nicolet Island has a population of about 500, has two inland lakes, and is adjacent to Charlevoix.  The stories also reach out to an unnamed Indian reservation that might be modeled after Hannahville in Menominee County.  Naubinway serves as a locale for some of the action.  Anyways, getting back to the story, Sherriff Callahan is besieged by both criminals and community forces that will bring him to a critical career decision by the end of the novel.  “A Dangerous Season” is a wild ride that will bring the reader along for a battle with international criminal gangs, Native Americans both good and bad, multiple murders to solve, and a touch of the supernatural.

Even though it is the last of the trilogy, the characters and situations were easy to acclimate to by way of hints dropped throughout the book. Callahan’s arc starts in the first book “A Dangerous Remedy” which begins when he retires from Chicago city police work after surviving a horrific acid attack that has left half of his face deeply scarred to the point where he feels the need to wear a half-mask, like the Phantom of the Opera I suppose.  Fee has an excellent grasp of small-town politics and foibles, such as the mistrust of any resident who wasn’t born on the island.  Accompanying Callahan’s journey is his family, long-suffering fiancé’ Julie and their son Max who has Down Syndrome.

Callahan’s partner throughout the series is the lovely and competent young deputy Amanda. The equilibrium is disturbed in this novel with the introduction of Nick as a love interest for her.  Nick enters the story as a young candidate for deputy who is struggling to find his feet. Originally a brilliant NSA analyst recruited from Stanford, Nick was studying for his PhD at University of Michigan’s Center for Domestic Terrorism. One encounter with Amanda, and he was hopelessly smitten to the point where he abandons his promising career to be a junior deputy under Callahan’s tutelage. What Nick lacks in training or experience, he tries to make up with zeal, often to his personal detriment.

As the story opens, mysterious goings-on at a Nicolet chicken ranch reveal a 10-year old Native American girl on the run.  She has crafty outdoors skills that allow her to evade law enforcement and disappears despite the efforts of the Callahan family to foster her. The entire novel takes place as winter is closing in hard and there is serious concern that she will freeze to death if not found quickly. Fee’s description of the perils of winter is lyrical and one of my favorite aspects of the book:

She didn’t notice when the clouds disappeared and the sky opened. She wasn’t aware when a new wind split by the trees spiraled around her. She didn’t feel the falling temperature begin to hone the air to a razor’s edge. It was the sudden cracking and snap of tree limbs that awakened her. Then she noticed the cold that had seemed, moments before, only  a  chill that nipped at her face.

The girl is suspected to be a Native American runaway, but how did she find her way on to the island?  She appears to be mute, although she can understand English well enough.  Her backstory will hold the key to unraveling mysterious deaths on the island that the community demands Callahan put a stop to or vigilante justice may prevail.  Amidst the mayhem, ritual killings are taking place that suggest the emergence of a Wendigo.  But is it for real or just a copycat crime? To compound the situation, the island’s most famously eccentric woman has begun reporting UFO activity—with actual physical traces left behind on the ground.  Callahan will need to collaborate with tribal police to help unravel the girl’s origins and a potential scandal that could go right to the top of the tribe’s leadership.

In reading Russell Fee’s “A Dangerous Season”, I was immediately reminded of constable Del Maki, John Smolen’s protagonist in the crime thriller’s “Cold” and “Out”.  Sherriff Matt Callahan has a similar appeal as a lone lawman pitted against overwhelming forces in the heart of a U.P. winter.  Anyone who enjoys a good crime yarn set against the picturesque and wild Upper Michigan winter will find “A Dangerous Season” a great page-turning companion.  Bundle up tight and throw an extra log in the woodstove for chills and thrills with Callahan’s team.