Summers at the Lake: Upper Michigan Moments and Memories by Jon C. Stott 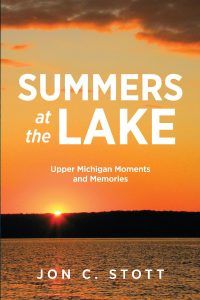 Jon C. Stott provided a colorful and realistic view of spending time at a cabin during the course of his life in his book “Summers at the Lake: Upper Michigan Moments and Memories.” The Upper Peninsula of Michigan (U.P.) renders many opportunities to explore the historical background of a fascinating location. Stott described many of the rituals his family practiced associated with spending time during the summer months at cabins. A song played loudly in his car while he departed the gray pavement of Albuquerque, New Mexico to the U.P. Counting games, counting days and purchasing groceries from the same market filled many of Stott’s days. He imagined fishermen casting from boats and the plague of nasty mosquitoes. The drive to his childhood cabin took one hour which seemed like forever. As an adult the trip to the cabin at Crooked Lake in the U.P. was 1917 miles, or 3 and ½ days. He enjoyed the tried and true small restaurants along the way in which he learned the local gossip. Never knowing what awaited him at his final destination such as fallen trees, backed up drains or broken appliances and computers. Stott longed for the simple life at the cabin filled with happy memories.

The lake beckoned him upon first arriving and he looked forward to the first swim, first meal and first beer. Craft beers served as one of his favored memories. Reminded that the cabin life was not a resort as a child which did not change much over the decades. He had to haul water when he was a child. Antique appliances and the internet existed at Crooked Lake along with running water and indoor bathroom accommodations. Lighting the oven became an adventure. He questioned the DNR count versus the actual number of wolves and warned to look out for the danger. Self-assured the wolves would not invade his territory.

Harvesting blueberries, avian encounters and lake dances filled many days. Bookshelves lined with many classics. The Falling Rock Café in Munising and Snowbound Books in Marquette provided many hours of reading entertainment. Many book fans are familiar with these businesses. A fire blazing emanated a warmth while he explored between the front and back covers of his begotten treasures. Storm watching led to additional indoor activities.

When he wandered afield with his family and friends, he explored the Seney National Wildlife Refuge; Grand Marais; Au Sable Point and the lighthouse; Sand Point Marsh Trail in Munising; Marquette’s Lakenenland and Fayette’s Museum Village. Stott explained the history of these sites. He gave interesting tidbits such as the real place in Ernest Hemingway’s story which involved the Two-Hearted River. The shore at one of the locations was referred to as the ”Graveyard Coast.” He defined the actual location of the North Country Trail. Enormous quantities of iron ore and copper was mined in the U.P. The U.P. has provided countless opportunities to explore rich historical treasures.

When Labor Day was around the corner, it meant the return to school during his childhood. Many dreaded the end of summer. Since his retirement he spends all of September at Crooked Lake. The Monarchs get ready for their annual trip to Mexico, flowers no longer in bloom and Crooked Lake begins to prepare for hibernation. He closed up and arranged for the trip back to the gray pavement of Albuquerque, NM. These preparations involved stop dates for his mail, long distance service, and the plumber to winterize. He conducted an eat down of all the food left at the cabin and hauled in the heavy lawn and dock furniture. Sipped the last of his craft beers. Upon arrival at his winter home, he often begins dreaming of next year’s excursion to the U.P.

Much can be learned about life in the U.P. and about the enjoyable places to visit by reading Summers at the Lake. The placement of the importance of rituals and the simple life resonated throughout the book. Stott clearly delineated what it was like to ride his bike on country roads, paddle a canoe and swim laps on a scenic lake, visit local establishments, examine wildlife, and explore historical landmarks. The reader will be encouraged to explore the wonders of the U.P. while dipping their toes into the everyday experiences of life near Crooked Lake.