Home Poetry Further up the Vine by John Hilden

Further up the Vine by John Hilden 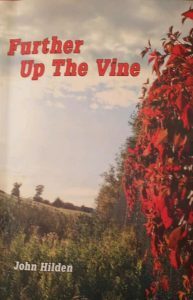 John Hilden’s poetry in Further Up the Vine is a different kind of dessert. It’s hard to select one or two lines to quote because each line and stanza connects so smoothly to the next to form the whole that a reader can’t break it down line by line. These are the poems you want to read two or three times, slowly, to absorb the meaning, like dark, semi-sweet organic chocolate, that you let melt slowly on your tongue so the flavor lasts a long time. They are not “loaded” with poetic elements but carefully worded, keen observations of people and ways to analyze our thinking and ourselves. These poems are like watching a parade of people and seeing into them through the poet’s eyes.

Some examples: “Job Offer” moves us beyond the obvious to the hypocrisy of the ambitious lapdog version of sucking up to the boss. “The Woodcarver” expresses the feelings of every artist or writer who has ever sat in a booth at an art show selling their products. “Empty Boast” speaks of small town gossip and truth. A great quote from “The Carpenter” reads, “We put our own construction/ on what others say and do/ Our eyes seldom light/ on the bubble in our own level.” Two other poems, “The Construction Worker” and “The Hermit,” challenge us to consider our prejudices and assumptions about others and how we are often dense to the obvious. When we judge, or are judged by others, we often reach “further up the vine” (echoing the book’s title) when we shouldn’t, only to realize we’ve been passed over for someone above us by contradicting our own principles. Hilden uses unusual contrasts and visual metaphors in “More Than Meets the Eye.”

Don’t read these when you are tired, or the poet’s words will go in one eye and out the other and you’ll miss the whole point.

Hilden’s poems also lend themselves to good discussion on implied verses’ literal meaning and the fact that there are no “right answers.” They would be excellent in high school and college literature classes to draw out higher level thinking skills. “Hayseed, Hick” gives us a hypothetical question to ponder: “Is the ball under the bed indicative of a bias you hide behind like a fig leaf?” And don’t miss the powerful metaphor in “Geometry of Failure.”

Let your mood decide what kind of poetry you want for dessert on any particular day. The two poets here present two choices, but every poet has something different to offer. Maybe you have some volumes of poetry in your bookshelf that taste like strawberry cheesecake or apple pie.