The Legend of Kitch-iti-kipi by Carole Lynn Hare 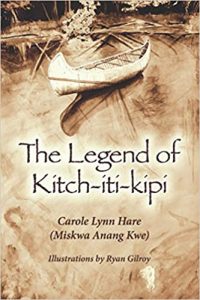 The Legend of Kitch-iti-kipi, by Carole Lynn Hare, is a retelling of the eponymous myth as passed down through generations of Sault Ste. Marie Chippewa (Ojibwe) Indian band.  The author, whose Native American name is Miskwa Anang Kwe, has an intimate connection to this legend.  Although packaged in a slim 24-page chapbook format, The Legend of Kitch-iti-kipi tells a gripping story and includes several illustrations by Manistique-area artist Ryan Gilroy.

Kitch-iti-kipi is a natural, spring-fed lake about 12 miles north of Manistique, which is on the north shore of Lake Michigan. It also goes by names like “The Big Spring” or “Mirror of Heaven.”  Two hundred feet across, the 40-foot deep Kitch-iti-kipi is Michigan’s largest freshwater spring; over 10,000 gallons a minute gush from fissures in the underlying limestone. The flow continues throughout the year at a constant 45 degree Fahrenheit.

Kitch-iti-kipi was just a black hole, all but hidden in a tangle of fallen trees, when John I. Bellaire fell in love with the site in the early 1920s. When the lumber industry dried up, Bellaire went south from Seney and opened a five-and-dime store in Manistique. In 1926, through an arrangement with Frank Book (who represented the Palms Book Land Company), Bellaire arranged for the sale of almost 90 acres – including the Big Spring – to the state of Michigan for $10. Deed stipulations called for the property to be forever used as a public park, bearing the name Palms Book State Park. Bellaire is the source of several bogus legends he propagated with the purpose of increasing tourism through drama.  Hare finally sets the record straight in The Legend of Kitch-iti-kipi. 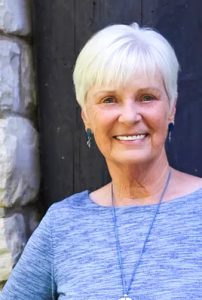 I heard Carole call this legend “a family story” once when I was on a Zoom call with her, and now I know exactly what she means.  Her great-great-aunt Pearl, a political activist, wrote the story almost 60 years ago and had it printed at the local newspaper office; since then, it has been passed down through the generations. Aunt Pearl herself heard the story as a little girl from her own grandma, who had saved and later befriended an old Ojibwe woman, named Mary, from hypothermia and near death.   Later one summer, Mary became upset about seeing a young brave getting ready for a swim in Kitchi-it-kipi and intervened by way of telling the legend to Pearl’s grandma.

A few years ago, the Thompson family found some printed and bound copies of the 1963 manuscript in their barn and gave them to Jerome, who was Carole Lynne Hare’s father and a highly distinguished tribal leader in his own right.  Carole made it her mission to right the story that was still being promulgated by the Michigan state park system.  Soon, she hopes the official website and signage for Palms Book State Park may be updated with an accurate rendition of this sacred legend. This booklet, with updated language for modern readers, is her retelling of the story for a new generation.

I was weaned on legends of the Ojibwe as transcribed in The Lore of The Great Turtle: Indian Legends of Mackinac Retold by Dirk Gringhuis (1970) as well as other stories of Upper Michigan so I was excited to find Carole Lynne Hare’s The Legend of Kitch-iti-kipi.  Like all good indigenous stories, The Legend of Kitch-iti-kipi is both a source of tribal history and serves as a morality play; in particular, this story is about lust and envy and how they literally destroy the lives of everyone they touch.

Hare describes the story as a Native version of Romeo and Juliet. In it, the deep love between a handsome brave and a young maiden drives a powerful chief to act out his jealousy. The results are tragic for all three.  The beautiful and willowy Little Fawn has fallen for the strong and handsome Young Eagle.  However, the lust of Chief Big Buck leads him to do the unthinkable.  The tragedy extends beyond the lover’s triangle to encompass even more woe as the site of Kitch-iti-kipi becomes imbued with a hateful black fog that threatens to smother anyone in its path.

Throughout the story, Carole Lynn Hare provides a great deal of cultural details about tribal life.  For example, the multiple roles of a midwife are revealed as teacher, healer, caregiver, nurturer, dietician and deliverer.  As well, the midwife was a kind of a god-parent or “do-dis-seem,” the spiritual nurturer of each child they delivered throughout their lives. Other tribal concerns, such as succession of leadership and the migration between winter and summer abodes, figure prominently.

The Legend of Kitch-iti-kipi is a great introduction to tribal lore for anyone interested in the history of the Ojibwe people in the Upper Peninsula.  In particular, I would recommend the booklet for classroom use in any unit on Native American history and culture. It is my hope that this reinvigorated edition of the legend will find a new generation of young people called forth to learn more about the culture, whether or not it is their own heritage.