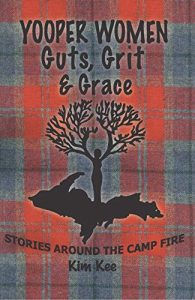 This collaborative work Yooper Women—Guts, Grit & Grace—Stories Around the Camp Fire is way more than its title suggests. In it, you will find several mini-biographies of Upper Peninsula women, as well as many unrelated writings: poetry, spirituality, self-promotion, opinion pieces and reprinted magazine and Internet articles. As the writer points out on page four, “This is not a normal book … therefore it doesn’t follow all proper book rules. We are not sorry.”

The best part of this collection is the mini-biographies written by the author herself. She is not a writer by profession (she is a fulltime massage therapist), but she has a gift for interviewing the elderly and conveying their stories in a very respectful, loving, sensitive way. As a result, every one of these true tales uplifts the reader. Kee is also an ace at condensing a woman’s lifetime into five pages (or less) of text.

Throughout, Kee refers often to the core values of Yoopers: family, community, safety and appreciating nature. In stories of women who were not from the U.P. but chose to relocate there, these values were cited time and again as the reason for the move north.

One of the more unusual stories is about Ceora, a professional animal communicator who, as a child, had difficulty fitting in. Consequently, she considered trees her friends.  Even now, as an older adult, trees continue to communicate with her.

The sycamores helped her feel loved and grounded when she didn’t feel it from her human family and friends. Nature and trees became her family. … For many hours she would sit at the base of a tree with pencil and paper and record their messages.”

Ceora’s connection with nature led to a profession as an animal communicator. She listens to animals and speaks to them, and then relays messages between pets and their humans. Through her experiences, Ceora has developed a metaphor called “The Circus of the Ego.” She says that emotions, such as fear, ego, hate, love, joy, manipulation, control and anger, make up our emotional body or circus ring. However, we are the circus masters, completely in charge of thoughts and feelings. We have the power over emotions and can tell them to be quiet. In my opinion, that is easier said than done.

A different kind of piece in the book, “Indicators You are On the Right Path,” written by Brianna Wiest, lists several points pertinent to emotional health. I laughed out loud at the quote at the top of the page that is attributed (probably incorrectly) to Sigmund Freud: “Before you diagnose yourself with depression or low self-esteem, first make sure that you are not, in fact, just surrounded by assholes.” [1] The wording in the article most interesting to me was “ghosting a bit of old friends,” a reference to no longer wanting to spend time with negative people.

Other material in this title came from Lazaris.com, a site that deals in metaphysics and spirituality.[2] On occasion, the vocabulary was unfamiliar to me, such as Shakti and chakra, references to concepts in Eastern religions.

While I don’t mind having to look up a word or two to grasp the meaning, I could have done without the occasional profane language and graphics – the book would have been so much better without them.

Yooper Women is an interesting read and keeps you turning the pages. The pieces are short, most running five pages or less, meaning you can read a story during a TV commercial break. Color graphics add to the visual appeal. On the downside, the text is riddled with proofreading errors, which distracted me from the stories. In addition, a glaring factual error appears on page 129: “Lake Superior, Lake Huron and Lake Michigan are the lakes that merge at the straights [sic] of Mackinac.” In fact, the Straits of Mackinac connect only Lake Michigan and Lake Huron.[3]

My conclusion about this book is that the author’s deviations from the norm had a primarily detrimental effect on the overall quality, particularly where the lack of professional proofreading was concerned. Another area was lack of organization – not grouping together like pieces in sections (e.g. poetry, spirituality, self-promotion, opinion pieces, and reprinted magazine and Internet articles).

Kee’s overall concept for the book was a good one, but the execution left a lot to be desired. I’d love to see her reissue the title with only her own writings of Yooper women. If she’d stuck to what the title implies, the result would have been much more rewarding for this reader.

[1] QuoteInvestigator.com. “Before You Diagnose Yourself with Depression or Low Self-Esteem…” According to QuoteInvestigator research, the quote was most likely from @debihope on Twitter, 12:23 PM – 24 Jan 2010. accessed October 25, 2020).

About the Reviewer
Donna Winters has been a published writer since 1985 and is the author of the Great Lakes Romances® series. She has over twenty titles in print and has been published by Thomas Nelson Publishers, Zondervan Publishing House, Guideposts, Chalfont House and Bigwater Publishing LLC. Learn more about her and her books at amazon.com/author/donnawinters.