Men of Conscience Imprisoned in the U.P. 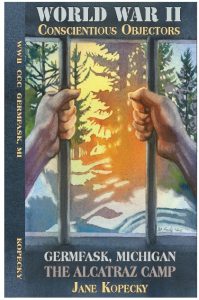 My first reaction to Jane Kopecky’s book, World War II Conscientious Objectors: Germfask, Michigan, was, “Wow! I never knew that.” As I dove into the book, I realized what an incredible amount of research the author had done and yet it was engaging and readable. I also learned that the subject was very complex. From a brief history of the community of Germfask, through the thirteen months that the camp in that area was open, to the first person accounts by several men who were sent there, to the little that remains today, Kopecky presents an unbiased account of the times and issues.

At the start, Kopecky reports that the goal of Selective Service personnel concerning conscious objectors was to “isolate them, study their behavior and keep them out of the public eye until they could figure out what to do with them.” Knowing that some COs would be unwilling workers made that even more frustrating to those in charge of the various camps. The Germfask camp housed the “bad boys” who had not gotten along well or had caused trouble at other Civilian Public Service camps. Perhaps those in charge thought the isolation of the area, coupled with long winters, would keep them quiet. As Kopecky shows, putting together all COs referred to as “incorrigible” actually gave them a chance to strategize and continue their Mahatma Gandhi-style nonviolent protests.

The author grew up in Germfask and had encountered some of the “campers” as a child. But when she began the book project, she learned that many people in her town, and some of the COs themselves, were reluctant to talk about it. The intent was to have men who refused to fight, for religious or philosophical reasons, do work that benefited the public and the nation; Kopecky points out the similarities to the Civilian Conservation Corps’ task of making work for unemployed men during the Great Depression. Many of those CCC camps were converted to CPS camps. The biggest problem was that the government did not pay conscientious objectors—unless you count $5.00 a month an equitable wage.

Kopecky reports that these men considered themselves “slave labor,” so why should they work? Many instances of that feeling came out in the personal interviews the author conducted. Once the people involved, both camp supervisors and campers, got past their reluctance to speak, out poured their stories, and the author reported these as they spoke or wrote them, never changing the content but occasionally correcting syntax and grammar. One very interesting thing I learned was that, in addition to not paying the COs, camps run by various church groups, like the Quakers or other peace churches, actually had to ask the families of COs to pay $35.00 a month for them to be at camp!

Another thing that amazed me was the high level of education many of these men had. One example is Dr. Don DeVault, who refused to do any work assigned to him at the Germfask camp (putting in fences and ditches in the Seney Wildlife Refuge) but managed to collect enough equipment to continue his study of antibiotics in a make-shift laboratory around his bunk. I had to ask: Why was a man like this not allowed to continue this important work at Stanford University in California where he had earned his Ph.D.?

Another issue the author spends a good deal of time on was prejudice and violence toward these men. While I understand that under the conditions of World War II, with so many men leaving their families to take up arms, people would have angry and negative feelings against those who chose not to fight, and prejudice was extreme. Kopecky relates several instances recorded in newspapers and in the statements of those men. Leonard Lewis, one of the COs, said, “After they got to know us, they liked us.” To me, this speaks volumes—all over again in today’s world. The author also documents instances of false reporting in news media at that time.

Other clearly presented issues include the general craziness of the Selective Service system, the difference between philosophical and religious objection to war and a discussion of the pacifist movement throughout history.

It is no wonder that the author received an award from the Historical Society of Michigan for her book. I am proud to have added it to my personal collection.

Deborah K. Frontiera grew up in Michigan’s Upper Peninsula, has lived in Houston since 1985 and taught in Houston public schools until 2008. A “migratory creature,” she spends the summer months in her beloved U.P. and the balance of the year in Texas. Three of her books have been honor or award winners. She has published fiction, nonfiction and poetry, for all ages, in both books and periodicals. She taught part time for Writers In The Schools in the greater Houston area from 2008 through 20016. She is the newsletter editor for the Upper Peninsula Publishers and Authors Association (UPPAA) and has helped judge many writing contests for both students and adults. For details about her many books and accomplishments, please visit her website.