Novel Documents an Historic Experiment in Faith and Society in the U.P. 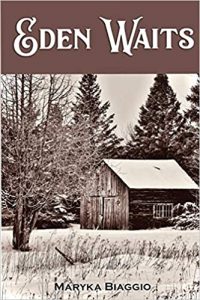 What happens when a compassionate, homesteading preacher invites a power-hungry visionary to transform his community into a product-sharing village?

Such is the case in Eden Waits, by Maryka Biaggio. This author, the great-great-great-granddaughter of her novel’s main characters, specializes in historical fiction based on real people. A vested interest in her ancestors, in-depth research into the events and culture of their era and considerable writing talent combine to make Eden Waits a virtual step back in time to the conflicts Biaggio so skillfully portrays.

More than three dozen characters populate this novel—a lot to keep track of—but no worries. Biaggio lists them all before diving into the narrative. I referred to the list on multiple occasions and was grateful the author had anticipated the readers’ need for it.

The story opens in July 1892 at Byers Settlement, a thousand-plus-acre homesteading tract of land in Michigan’s Upper Peninsula owned by Abraham and Elizabeth Byers and their kin. Elizabeth cherished having womenfolk close by and kept track of activities in the settlement, assisting anyone in need. Meanwhile, Abraham traveled the county, promoting the platform of the Populist Party. Early in the novel, a snippet of conversation quickly defines the relationship between Abraham and Elizabeth.

“Well, Mother … you may think a man wants spunk in a wife, but it only leads to problems.”

“You don’t mind my spunk when I’m chasing weasels out of the chicken coop in the middle of the night. … I’ll remind you who keeps this house running while you’re gallivanting all over the county.”

Abraham makes a trip to town on the day the newspaper announces the failure of James Weaver, the Populist Party’s candidate, to win the election. As if the news weren’t bad enough, someone steals Abraham’s satchel. An impulsive decision prompts Abraham to forego buying an item Elizabeth was counting on and instead purchase leather to make a new satchel. The result sends sparks flying.

“You’re buying cowhide when I need vinegar for my medicine?”

“I want to work on my satchel and stay away from town. … Got a new president, and it’s not Weaver.”

“Don’t you go blaming the election for what you did. My own sister’s husband has the consumption and you’re buying cowhide?”

“Don’t you tell me who I should and shouldn’t see to. … At least I watch over my family.”

Later in the story, when the concept of a product-sharing community is starting to come together, and one of the rules requires residents to leave their existing homes and move into new homes that will be built in a village cluster, Elizabeth balks.

“Abraham, this is our home. I don’t want to move.”

“I’ve signed the association papers, just like every other landowner. We’re bound to the rules now.”

Elizabeth’s breathing turned shallow, and despair overtook her. She hated everything about this village notion.

Even though the plot for this story is a foregone conclusion (you only need do a search on Hiawatha Colony to glimpse the outcome), getting from concept to dissolution is a riveting historical journey. Twists and turns impossible to foresee kept me turning pages with as much alacrity as my reading speed allowed. All the while, I felt as though I were living the crises with Biaggio’s characters, or, more accurately, ancestors.

Dialog is one of the author’s strong points. The phrasing and colloquialisms of the late nineteenth century peppered every exchange. I could have easily believed the words were straight from history rather than the fictional fodder of the author’s imagination.

The main characters were well drawn and complex. They remained true to form until, with great skill, the author portrayed deviations unexpected but wholly believable. Some interpersonal relationships dissolved in the storms of community development, while others, built on more solid ground, weathered the crises and grew stronger, offering great reader satisfaction.

Biaggio’s descriptions of settings put the reader squarely in Michigan’s Upper Peninsula and in the shoes of her characters. I could see the counter and shelves lined with goods in the country store, sense the formality of the courtroom proceedings, smell the woodsy forest while traversing its path and feel the heat of the laundry tub as it began to boil.

For readers of historical fiction, I highly recommend Eden Waits. A great bonus with this title is that any liberties the author may have taken with strict historical facts are imperceptible. The story moves seamlessly from 1892 to 1895 and includes an epilogue as fascinating as the tale itself. The time I spent in the 241 pages of this volume were, for me, worthwhile and enjoyable.

Donna Winters has been a published writer since 1985 and is the author of the Great Lakes Romances® series. She has over twenty titles in print and has been published by Thomas Nelson Publishers, Zondervan Publishing House, Guideposts, Chalfont House and Bigwater Publishing LLC. Learn more about her and her books at amazon.com/author/donnawinters.