Into the Digital Maw by Ryan Hansen

Into the Digital Abyss.. and Back Again

Ed. Note:  “Into the Digital Maw” is currently out-of-print 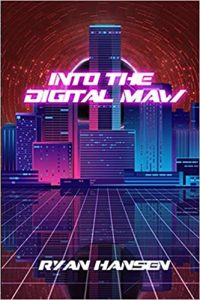 Into the Digital Maw by Ryan Hansen

Ryan Hansen’s journeyman novel Into the Digital Maw is a sprawling, high-concept story of a lone hero attempting to free a society imprisoned in a post-apocalyptic digital landscape.  In this future world, there is a clear line of demarcation between the real world (a.k.a. “The Real”) and the digital world known as the FEED, short for Final Extant Evolutionary Digitalworld.  Our story opens in the year 2131 A.D., just over 30 years since a meteor known as the Monolith crashed into Earth bearing an alien virus hell-bent on ending life of this planet.  The plague consumes animals, plants, and everything else in sight while leaving behind only a barren orange sandy residue covering the landscape to a depth of many feet. Short of a solution to the plague, the denizens of the year 2101 felt they had no choice but to move populations into isolated underground bunkers to preserve the species of man.  Borrowing a meme from Wachowski’s The Matrix series, the people spend nearly their entire lifetimes immersed in solution-filled pods completely isolated.  Food and air are pumped in, waste products removed, and muscle stimulators prevent atrophy in this weightless limbo.

Into this bizarre new reality we are introduced to Duncan Rygar, our story’s hero.  Duncan has lived his entire life as a good digital citizen working a productive job in the FEED as a Data Sifter and among the perks he enjoys is a virtual Lamborghini. He ranges the length and breadth of the 80-mile long virtual landscape where his duties are to find and erase dangerous historical data artifacts throughout.  Past citizens known as Creatives have squirreled flash-discs and memory cubes with their works.  Duncan and his mentor Grig have both been indoctrinated with the idea that these memories may contain deadly “cyber-cancers that could be eating away at your frontal lobe!”  Whether this is actually true or just another lie propagated by the fascistic dictator of the colony, known only as Minister General (“MG”), remains to be seen.

Duncan is the opposite of a misanthrope; he seeks real connections with real people but only meets with ongoing frustration in trying to build relationships with other people’s avatars in this virtual world. For one, you can never quite be sure whether you are interacting with a real person or just another “simulant” – an artificial intelligence construct which mimics humans.  Indeed, every adult is assigned a simulant to provide companionship and the elders attempt to find a replacement to quell Duncan’s unease. Of course genuine physical contact cannot be made between people entirely encapsulated in separate pods so a “bliss-exciter” is wired in to stimulate the pleasure centers of the brain.  Duncan’s unease grows as he manually disconnects from his bliss-exciter which amplifies his dissatisfaction with this simulated society.

One strange side-effect of the alien virus is that it purportedly makes contact between male and female people a deadly outcome:  “[the virus] mutated into a second-form: a parasitic microbe that burrowed into the epidermis layer of skin… This lethal-stage was activated when male carriers were touched by female carriers, but not vice versa; infected women, however, died when giving child birth.” Although there is video evidence of this in the archives, no one living can say if it really is a threat or perhaps just another piece of MG propaganda.

Unlike many novels of the cyber-genre, the early chapters of Into the Digital Maw all take place in the virtual reality of the FEED while the later chapters deal with the ramifications of Duncan’s jailbreak from his pod in the real world.  For once he has committed to escaping the underground dungeon of endless hallways housing the pods, the MG and his minions are on to Duncan and he can never return.  Punishment in this virtual society is swift and merciless:  offenders are physically barricaded into a pod with the FEED disabled so they drift aimlessly through darkness in total sensory deprivation until they are overtaken by madness or a cardiac arrest. Throughout his quest, Duncan is haunted by an image that he found while sifting through data of the now-dead civilization: an ordinary wedding-day photo of a beautiful bride and her groom. Indeed, in this artificially constrained society, the very concept of marriage has atrophied to the point where it is almost an unknown vocabulary.  Will Duncan escape and live out his life as a fugitive or will he return to liberate the colony and rescue his true love?  Strap on your VR goggles and take a dive into Ryan Hansen’s digital maw and enjoy this original science fiction thriller for yourself.

BOOK TITLE: Into the Digital Maw: A Novel