Out by John Smolens 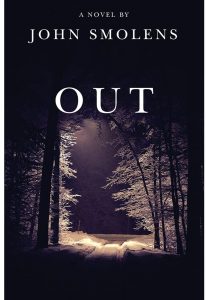 Out by John Smolens

“Out” is a word that probably has a hundred different uses in the English language—everything from “out cold” to “out of the closet” —and, in the case of John Smolens’ novel of the same name, it means living “out of town” or “out in the woods.”   Although Out loosely picks up somewhere in the aftermath of Smolens’ previous single-word titled opus, Cold, you can pick up this book directly and enjoy it on its own. Delbert “Del” Maki, former constable of the fictional Yellow Dog township—about a half hour out of Marquette—is the only returning character in this novel.  Del is facing an existential crisis of epic proportions in the midst of a blizzard that engulfs him and a raft of other characters that stumble through his door where he lives out in the country. Specifically, Del is just out of his second hip replacement surgery and desperately pining for his dearly departed Liesl, a sturdy companion and his life’s only joy.  Liesl succumbed to cancer about a year prior, and Del is hovering on the edge of opiate and alcohol abuse as he longs to join her in eternal rest.

Out has a fast-paced feel to it even though the vast majority takes place in a 24-hour period,  a period punctuated by an epic blizzard that becomes almost a full-fledged character.  The blizzard strands a wild cast of characters with the solitary Del Maki while wreaking havoc on vehicles and his newly remodeled cabin.  Smolens writes, “Everything was white except the trees, which were the blackest black” and really captures the majesty, as well as the cruelty, of winter’s worst storms. The writing reminds me of the late detective fiction writer Elmore Leonard, whose talent for brevity of dialog and putting you inside the mind of a criminal are channeled in Smolens’ Out.  This story is not a murder mystery per se, but an intense psychological thriller in the vein of Cape Fear or The Night of the Hunter.  Smolens’ skill is in putting you inside the minds of characters in an organic way, as each takes stock of the developing scenario.  The author deftly avoids “head hopping” in such a way that you can fully understand the motivations of the cast. 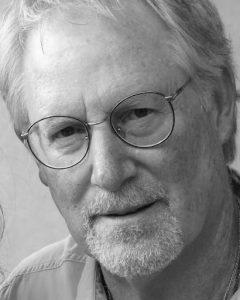 John Smolens, author of Out

Out takes place in both present and past time, with flashbacks into two or three timelines with intersecting characters.  The major dynamic of the book is essentially a love and hate triangle among Marcia Fournier, a visiting physical therapist treating Del, the stolid Conner Tyne, a straight-arrow, working class guy in Marquette and Barr, a sometime friend of Conner and local bad boy who believes that people exist mainly for him to exploit.

As the story opens, an extremely pregnant Marcia has lured both Conner and Barr to Presque Isle Park for some kind of showdown (or perhaps a reconciliation).  Conditions leading up to the event are such that either Conner or Barr have an equal shot at being the unborn child’s father.  One thing leads to another and the burly Conner assaults Barr with such fury that when he and Marcia leave him in the blizzard, they are pretty certain he’ll die of exposure or his injuries.

Smolens so gradually and skillfully reveals back-stories that you immediately understand the motivations of characters in each of the many twists and turns during the long night of the blizzard, especially the mercurial Barr, who sees life in black-and-white as a result of enduring a harsh childhood demarked by a series of his mother’s alcoholic, abusive boyfriends.  You can see how Barr has descended into a life of casual break-ins and burglaries in which he justifies his actions as teaching a lesson for those too stupid to lock every door and window and use burglar alarms in an area that prides itself on no need for such big city conventions.  Barr’s long freefall from grace includes a run-in with a Chicago mobster and a crime ring that extends all the way to the Florida Keys.

Del Maki, our narrator through most of the book, is in no position to confront a vengeful Barr, returning as he is from his own attempted murder.  Del can barely move without a cane and cannot physically confront Barr, so he must use his wits alone to attempt to prevent what might very well turn into a multiple homicide in his own home.

There are plenty of local touches to tickle a U.P. reader, from the paramedics of Marquette General Hospital to Presque Isle Park to US-41 and County Road 644.  However, I believe Out will appeal to any reader who likes a good survival tale in the mode of Jack London, or a contemporary thriller in the vein of writer/director Quentin Tarantino.  Make sure you’ve got a blanket to snuggle up with as you’re not going to want to put down Out once you get into it!