A Dream of Steam by James W. Barry 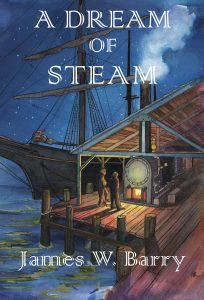 A Dream of Steam by James W. Barry

A Dream of Steam (2018) is James W. Barry’s ambitious debut novel of industry and adventure in the closing years of 19th century Michigan.  Loosely based on the largely forgotten exploits of the real-life Moilles brothers, who would do anything to save the sawmill that was their livelihood. With a scope as big as a James Michener novel, harrowing outdoors action as tense as Jack London and with a keen eye for historical detail as a Mikel B. Classen story, A Dream of Steam has something for everyone.  The brothers McGrath are an odd couple to be sure.  William, the younger, runs a formerly successful sawmill out of DeTour at the extreme eastern edge of the U.P.  However, due to its existing undershot watermill, the McGrath mill has reached the limits of its capacity and is rapidly losing ground to steam driven equipment.  Captain Thomas McGrath, the elder brother, is happily working the Great Lakes, largely carrying lumber from the DeTour Mill on down to Detroit and returning with cargo back the other way – sometimes as far as Port Arthur (now Thunder Bay). The brothers are the center of this story, which expands west to Hancock for the story of Klara, a Polish mail-order bride and south to old Detroit, where the brothers must deal with an unscrupulous banker and hopefully reunite William with his mercurial runaway wife, Carmina.

As a young man at Michigan Tech in the mid-1980s, I studied in the Science, Technology & Society program under the (now) professor emeritus and author Terry S. Reynolds. He had a knack for making 19th century steam engines come alive in his lectures that was just uncanny.  You felt like you could almost feel the heat coming off the meticulously prepared 35mm slides.  James W. Barry has the same talent for precise description of every fitting, bolt and gasket, as Thomas and his stolid engineer, Boyle, race against the clock to prepare their mill for the onslaught of the spring timber run.  He applies a similar level of authenticity to the timber harvest, which really makes you almost smell the pine.  But Barry’s true talent shines in the nautical sections of the book.  I was immediately reminded of Patrick O’Brian’s Master and Commander in its attention to detail, the descriptions of arcane rigging, the teamwork of the crew and, of course, the captain’s orders. Together these elements create a cadence akin to poetry.  I had never considered exactly what steps it would take to bring a square-rigged sailing ship that is docked facing downriver and safely turn it around to face upstream.  And of course there’s true naval adventure, including the penultimate battle of wits between McGrath’s schooner and the unscrupulous Timberman Cedric Inch in a beat-to-hell steam tugboat. I was unsurprised when I later confirmed that the author has himself sailed Lake Huron in a square-rigged brigantine (double-masted) boat and is also an instructor.

Barry weaves disparate story threads together with a binding theme of economic desperation and the struggle to overcome, a theme often employed by the mid-20th century novelist Norah Lofts.  William McGrath, as mentioned earlier, must revamp his mill or perish.  Klara has travelled thousands of miles only to find her betrothed had died in a mining accident and must contrive to earn her way back to civilization. Inveterate gambler Fitzpatick is cooking the books in the vault of a Detroit bank to support his habit and will ruthlessly exploit anyone who stands in his way, including the McGrath brothers, whose expansion loan is their only lifeline.  The thread that binds these folks who are hundreds of miles away is astonishing in scope and reminds us this decade saw the completion of phone and electrical networks in the Midwest.

Technology aside, there’s a dash of romance as well.  Will Thomas win back his wayward Carmina? She has fled to Detroit and a chance encounter leaves him even more mystified. Can Klara find true love after escaping the neglect of a violent and drunkard miner?  Initially rescued in the middle of a tumultuous storm that has wrecked the boat in which she has booked passage, she keeps returning to the orbit of the McGrath’s. Outdoor adventure abounds, too!  There is a perilous late winter ice crossing by snowshoe in the Straits of Mackinac, a featureless wasteland of broken ice heaved together, where you can easily get disoriented or cast adrift on an ice floe.  I found this section particularly gripping and almost claustrophobic despite being on a vast plane.