Home Authors Across The Bridge by Kristin Neva

Across The Bridge by Kristin Neva

Neva’s New Novel about Love and Friendship in the Keewenaw. 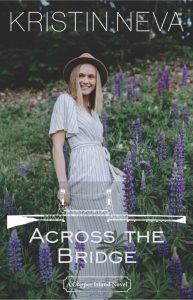 Across the Bridge by Kristin Neva

Across the Bridge (Kristin Neva, 2018) is the story of widower Drew Smith and his son AJ who are moving to Copper Island (the Keweenaw) less than two years after the tragic loss of Kristine, AJ’s mom. Although this is technically book #3 in the Copper Island series, I had no trouble diving in headfirst to meet the delightful recurring cast of characters.  A Christian contemporary romance, the book centers around how and when Drew will be ready to start a new relationship as the broken family moves from Wausau, Wisconsin to Quincy, Michigan.  Drew is a CPA and taking a big step down from his corporate job to fill a lesser role at local Douglass State University.  Although Drew was raised downstate in Detroit, he chooses Quincy because his own parents are much older than his wife’s and Kristine’s mom and dad are better prepared to help take care of 10 year-old AJ.  This adds a delightful fish-out-of-water aspect as Drew has to negotiate the minefield of a new small town where everyone seems to know everyone else’s secrets, except for Drew himself.

While many works in the romance genre attempt to create romantic tension between a woman and potential suitors, there’s no doubt—from the first chapter—that Drew and Marcella Seppa are meant to at least give it a go.  In every romantic plot, there must be forces or people keeping the couple apart, either physically, emotionally, or romantically.  In this case, there are at least a couple of barriers to conquer.  28-year old Marcella is still smarting from her father’s quick remarriage following the death of her mother 15 years ago.  Marcella felt betrayed to such a degree that she still, as much as possible, actively avoids her step-mom, Kandy.  Drew’s inability to move on following the accident which ended Kristine’s life is symbolized by his stubbornness to remove his wedding ring.  Last, but hardly least, is a family secret about to emerge from the small town gossip vine that, if mishandled, could tear Drew’s family apart.

As a Christian novel, Across The Bridge portrays Marcella as a woman with an interesting mix of contemporary characteristics and sensibilities.  Marcella embraces New Age practices as well, in that she addresses the Universe, talks to plants, does Reiki along with her massage practice, and is an intuitive healer. She has a strong crisis of faith, feeling betrayal from the Church due to the platitudes and homilies that gave her false hope in witnessing her mom’s agonizing and losing battle with breast cancer.  Marcella’s existential complaint is timeless: “Why does a benevolent God allow tragedy to befall good people of faith?” This theme is one that perhaps Kristin Neva herself has had to come to terms with when her own beloved husband entered the end stages of the degenerative muscular disease known as ALS (a.k.a. Lou Gehrig’s disease)—a major subplot involves how a care-giving community coalesces around Grandma Lou, who, when we meet her, is dying of ALS and in a nursing home.

Lest you get too pulled into the serious nature of impending events and conflict, Kristin Neva provides comic relief in the contradictions of U.P. native Mak Maki.  He is an old-time, rough-and-tumble lumberjack with Yooper fashion sense and a local dialect to match.  The humor arises organically as this grizzled woodsman struggles with a series of Amish romances that he writes under a pseudonym, while secretly stealing plot points from the lives of local Quincy townspeople!

Regional fiction usually has one of three appeals to any given reader: nostalgia for people who have left the region (expatriates), hometown pride for people who currently live in the region, or a way for either of the first two to introduce a region to their intimates who have never been there.  I believe this book excels in the first two cases the best.  Details of Copper Island, or as most know it, Copper Country, are introduced gradually, so a sense of place slowly infuses the story with a familiar beloved flavor.  Kristin Neva shares some of her Keewenaw peninsula favorites, including the Hungarian Falls as well as traditional Upper Michigan activities like watching the Northern Lights and sledding.  Beyond the environs of Copper Island, a school trip to Mackinac Island plays a pivotal role.

As a Christian romance, the story is quite chaste—in fact, you’ll have to hold out until Chapter 37 for the pivotal first-kiss moment.  However, in the end it delivers everything that you expect from the genre plus modern sensibilities about family dynamics, including a healing that must take place between Drew Smith and his mother-in-law to come to terms with Kristine’s tumultuous marriage and who might be to blame for her tragic end.  If you enjoy a slow-paced contemporary Christian romance with a local twist, I would recommend Kristin Neva’s Copper Island series in general, and Across the Bridge, in particular.

This review was originally published in The Marquette Monthly, April 2019