View from the Sideroad: A Collection of Upper Peninsula Stories by Sharon M. Kennedy 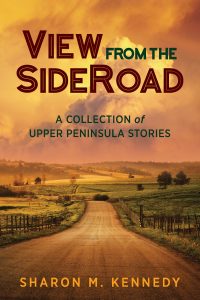 Sharon M. Kennedy has mastered the art of telling short stories due in part to her history as a columnist for the Sault News in Sault Ste. Marie, Michigan, the articles she has written for the Mackinac Journal and her collection of short stories in View from the Sideroad: A Collection of Upper Peninsula Stories and The Sideroad Kids: Tales from Chippewa County. Kennedy has used to her advantage a variety of techniques to define her characters and what happens to them such as wittiness, unpredictability and resiliency. It was amazing how many different storylines and topics Kennedy devised for this book. From Tank, a man who appears to be allergic to water, to a woman who has no idea what day it is. Some of the themes involved in this book were frustration, grief, anger, a sense of duty, and confusion. Her masterful ability to bring her characters to life and provide readers with unique storylines has shown brightly with this book of short stories.

I was surprised at some of the endings of the stories in this book such as the car accident in the “Misbegotten Larke Jones” chapter. Larke comes across as having it all together and then the reader learns about his extremely dysfunctional family of origin and how he struggled with finding what was missing in his life. Larke had a brief moment of clarity. He did fill the voids in his life with alcohol and easy women. In an attempt by his father-in-law to free his daughter from a wild life, he ended up feeding the beast of addiction.

It was interesting to learn about the mysterious relationship defined in the chapter “Aunt Betty’s Secret.” Most of us have had relatives who have more money than others. There is often jealousy and resentment toward the one who seems to be more well-off. I enjoyed how Aunt Betty liked to wear ratty clothing and shoes while she had so much money and refused to wear the newer items of clothing she had in her closet. Aunt Betty put Blossum to the test regarding caring for her home and she rose to the challenge. I wondered how long Blossum knew Aunt Betty was a closer relative then we were led to believe.

The story called “Crowded Aisles at Callaghan’s Market” displayed a cacophony of images created by Kennedy. The elders resembled vegetables that were soon approaching decay while they ordered a young man to apologize to the person who bumped into him. The young man wanted to escape the berating and go outside into the fresh air. Kennedy brought to life the main character’s angst and his process of dealing with loss.

Remember the beanie baby obsession? Kennedy brought to life a positive change for a lonely woman who purchased some of them. When she stood in line to buy the little stuffed toys, she met people who ended up being her friends and she met the man of her dreams. Kennedy created an interesting story with twists and turns about a fad with a happy ending.

“Junk Drawer Blues” brought to life a woman’s struggle to maintain a long-distance relationship with a man she thought loved her as much as she loved him. The cabinet drawers revealed the real story. The couple in “Forgive Us Our Sins” demonstrated a level of unhappiness that could only be dealt with through escape. The chapters were thought-provoking such as the realizations made by Jade Bea.

I highly recommend View from the SideRoad because of its unpredictability, well-written drama, and relatable characters. Kennedy really upstaged herself with the story about the upstairs renter with the rhythmic, scary drama between two renters. I was reminded of the gothic Edgar Ellen Poe story about a beating heart under the floorboards, the “Tell-Tale Heart.” And why did a stranger cook delicious food for the owner of a cabin? Kennedy delivered so many different scenarios with a variety of outcomes which included an entertaining outlet with surprising characters and outcomes. The book is a definite page-turner.