Novel Full of Quirky Characters You Come to Care About 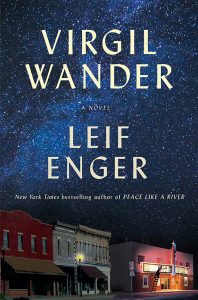 Leif Enger’s Virgil Wander is an intriguing novel that manages to rope the reader in without a lot of sensational hooks, but instead, real-life characters in real-life situations. Set in a small town in northern Minnesota, the novel first introduces us to the title character whose car accidentally goes off a bridge into Lake Superior. While Virgil survives the incident, he suffers from memory loss and struggles first to remember people’s names and faces and his own past, and then finally just words. His memory comes back surprisingly fast, but it changes his behavior in subtle ways. Nothing flashy or immediately life-changing, but he finds himself slowly reacting differently to people and situations.

The novel’s other quirky characters include Jerry Fandeen, who has sort of been lost for a while, his marriage slowly falling apart; and Adam Leer, the well-to-do son of the town founder who had his fifteen minutes of fame as a filmmaker and now has returned to his roots. When Virgil helps Jerry get a job as a handyman for Adam, Jerry asks to borrow some tools from Virgil. Only, Jerry claims the tools he wants to borrow are actually tools Virgil had borrowed from him. Virgil knows Jerry is conning him, but the new Virgil lets it happen.

And then there is Rune, a man from Norway who comes to town because he just found out he has a son he never knew about—a son who resulted from an affair he had in his youth when in the United States. The mother of his son, on her deathbed, contacted him to tell him this secret. Only, the son, as an adult, one day flew off in an airplane and never returned. It’s assumed he’s dead, but no one knows for sure. Rune comes to town anyway to learn more about his son from those in the town who knew him, as well as to get to know his son’s wife and his grandson.

The novel follows the lives of these and several other characters over the course of many months. As I read, I often wondered where the story was going, but I was invested in the characters enough to continue reading. I felt like I was reading something halfway between an Anne Tyler novel, filled with dysfunctional people trying to make sense out of their lives, and a Steve Hamilton novel, set in the north with a mystery attached, given that we don’t know if Rune’s son is really dead and we also suspect Adam Leer is up to something. Adam is just creepy enough in the way he speaks to remind one of the vampire Lestat. Such comparisons to other authors and their works does not mean Enger is not his own writer, but just that he captures the attractive portions of several genres to create his own interesting world. The very best novelists are able to supersede genre formulas and blend them in this way.

One of my favorite parts of the novel had to do with Virgil owning the Empress, the local movie theater, which is performing poorly given that he is lucky if he sells eight tickets per night. However, over the course of the novel, the theater becomes revitalized as Virgil reaches out to a young man who helps him make it part of the heart of the community again. To add to Virgil’s problems, when he bought the theatre, several reels of old movies, some dating as far back as the 1960s, were on the property. It is illegal for him to possess these films because they are technically the property of the studios that issued them and are considered stolen goods, so Virgil has to determine how to dispose of them without getting himself into trouble.

The novel’s climax comes as a bit of a surprise, and yet not really. I won’t hint at it, but in the end, it is handled well and is believable without being overly sensational. Throughout, Enger makes plot subservient to character development, the events happening directly as the result of the characters’ actions, which, in turn, are the direct result of their personalities. Enger is clearly an author who has studied or has a natural knack for writing realistic fiction. Given that his debut novel Peace Like a River won several awards, the fine writing displayed in Virgil Wander should be no surprise. Anyone who likes a realistic story about real people dealing with real problems and who still find a reason to go on will find this novel absorbing.