A colorful and educational romp in Michigan’s National Park 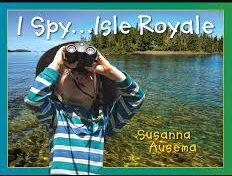 I Spy… Isle Royale, by Susanna Ausema, is a colorful and educational romp through the flora, fauna and geology of Michigan’s only remaining national park. Isle Royale is unique in so many ways it’s hard to list them all. The island is the 4th largest freshwater lake island in the world, it is 45 miles from end-to-end, it boasts a ridge that rises more than 1,000 feet, and yet, unlike Mackinac Island, there is not a single road to be found!  As a student at MTU, I always saw the Ranger III ferryboat making its rounds to and from Isle Royale, but I never had the courage or the resources to actually brave a weeklong camping trip in this most wild place in Michigan.  There are no day trippers on board for the six-hour, one-way trip between Houghton and Isle Royale.  Although no one in living memory has grown up on the island, Ausema has as good a claim to that as anyone: her father was a park ranger there and her mother a park volunteer during her formative years. She interned as a ranger during college and met the man of her dreams—another park ranger. Their young son, Jasper, was the illustration for this beautiful tribute to the island and appears on the cover. Ausema was not an illustrator but taught herself watercolor just to make this book. Her unaffected illustration style is perfect for a children’s book and is complimented in places by color photos.  The text itself has two tracks: one in rhyme for kids and prose for older children or adults interested in such things as the behavior of species or the joys of wild blueberry picking.  The book was published by the Isle Royale & Keweenaw Parks Association, a member-supported “friends of the parks” non-profit association (www.irkpa.org). I would heartily recommend I Spy… Isle Royale for school and library collections throughout the great state of Michigan.